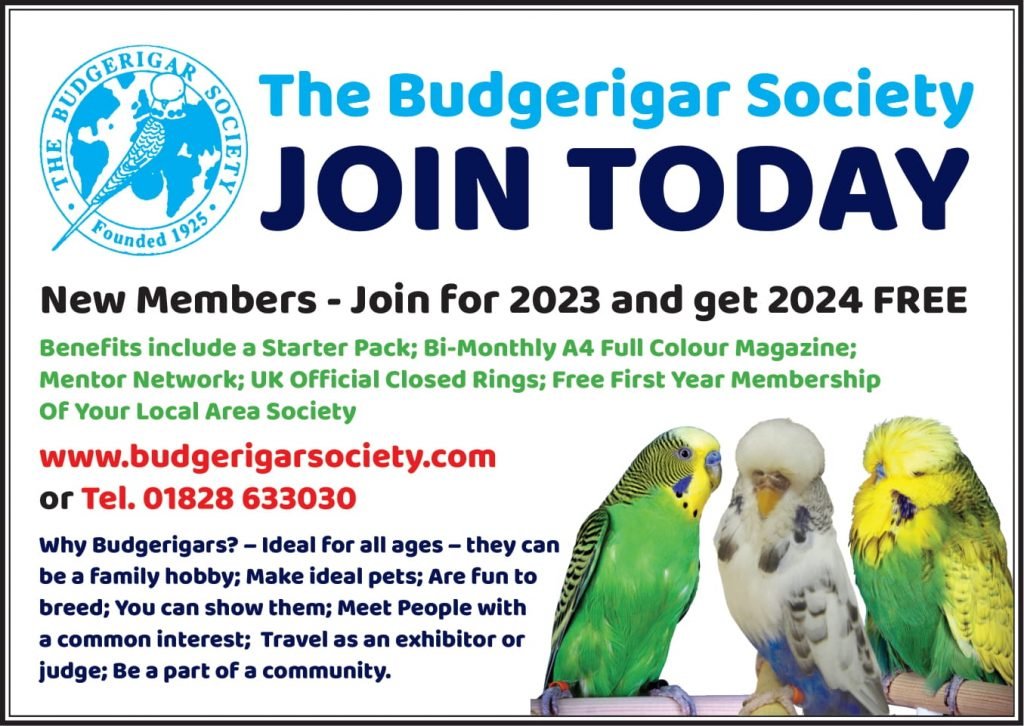 In joining this society, you become part of a community of folk who are united in their common interest in a delightful parakeet, the budgerigar, and have the added advantage of following this interest under a structure which is ordered, has a stable history, and yet can remain forward-looking in moving the fancy into its future — although always with a questioning glance towards the past.

The structure binding the society into its roots in the local societies holds us as one entity when it is necessary but allows the freedom to pursue the fancy in whatever direction it takes us. Members can always be conscious that they are an important part of the society, because the society is its membership.

Some of the more tangible benefits of being a member are:

Most budgerigar fanciers like to put closed rings on their birds, as a means of identity. Such rings are large and yet light enough to cause the bird no kind of discomfort, but small enough to have to be placed on the bird’s leg at only a few days old – ensuring that a ‘new’ ring cannot be put on an ‘old’ bird!

On first joining the society, each member is allocated a membership number, usually beginning with the first initial of their surname, followed by up to 4 numbers. This code is unique – issued only to one person (or a partnership) and is stamped on rings purchased from the Society. This ensures that birds carrying this ring can, for whatever reason, be traced back to their breeder and their owner. Fanciers purchasing their rings receive them in sets of ten, consecutively numbered and bearing the current year printed on them – so every bird bred has a unique number.

Having the year of ringing included on the ring determines the age of the bird – so an old bird cannot be sold as a youngster. Additionally, show promoting societies offer prizes for winning young birds, bred in the current year, and these rings are proof that the winning birds qualify for such awards.

The society publishes a professional bi-monthly magazine which is posted to all members of the society. The magazine contains a features and articles on all aspects of our fancy, written by fanciers in this country, and around the world. Additional features include reports and results from area and specialist society events throughout the country.

The society is indeed fortunate in being able to call upon excellent photographers who are able to bring their skills to the magazine for the benefit of all BS members.

All members, whatever their length of membership and time in the fancy are invited to submit articles about their experiences, letters and photographs to be considered for publication.

This publication is published periodically to confirm the General Rules and reflect any changes that have been made. It also encompasses the current Show Rules, including specifications for the show cage and the Guidelines for Judges and exhibitors, culminating in a directory of members and judges who are members of the society’s Judges panel.

Since the society was formed (in 1925) it has taken responsibility for defining and describing the various features which make up the ever-expanding number of new varieties of budgerigars that have been bred since this species was first introduced from its native habitat. Particularly in the last few years, increasing efforts have been made to re-establish the true integrity of each of the mutations that have appeared and been fixed. In 2012 the Colour Standards booklet was published which gives a comprehensive collection of accurate colour illustrations and descriptions.

A fairly large, but not overwhelming, proportion of our members take an active part in the exhibition side of our fancy, and there is no doubt that our shows throughout the country have served a number of uses, apart from the individual pleasure derived in the healthy competing with one’s birds against those of other enthusiasts.

From the early days of the society, it has encouraged the promotion of such events, large and small, by supplying them with Patronage – a package of prizes, rosettes, etc for competition among its members at those shows (which are open to all budgerigar fanciers, whether members or not), to enter as exhibitors.

The Budgerigar Society gives an assortment of Patronage packages to around 100 shows within the UK culminating in its own World Championship Show held in Doncaster during September each year. The Patronage offered by the society is probably the most sought after in the U.K. and is based on benched entries – the more birds benched the better the Patronage. Overseas patronage is offered to all affiliated parent bodies overseas.

Judges at shows receiving Budgerigar Society patronage are trained under a 3-year programme and are required to judge to the procedures and standards of perfection laid down for exhibits by the Society. The hope is that this increasing quest for consistency promotes the confidence of our exhibiting membership in supporting patronage events throughout the country.

Follow the Shop Link to view some of the excellent products obtainable from the society, ranging from books and booklets, to equipment and supplements to assist you in all aspects of the hobby.

Benefits to overseas members include: