Guidelines For Judges and Exhibitors

Guidelines For Judges and Exhibitors 2011 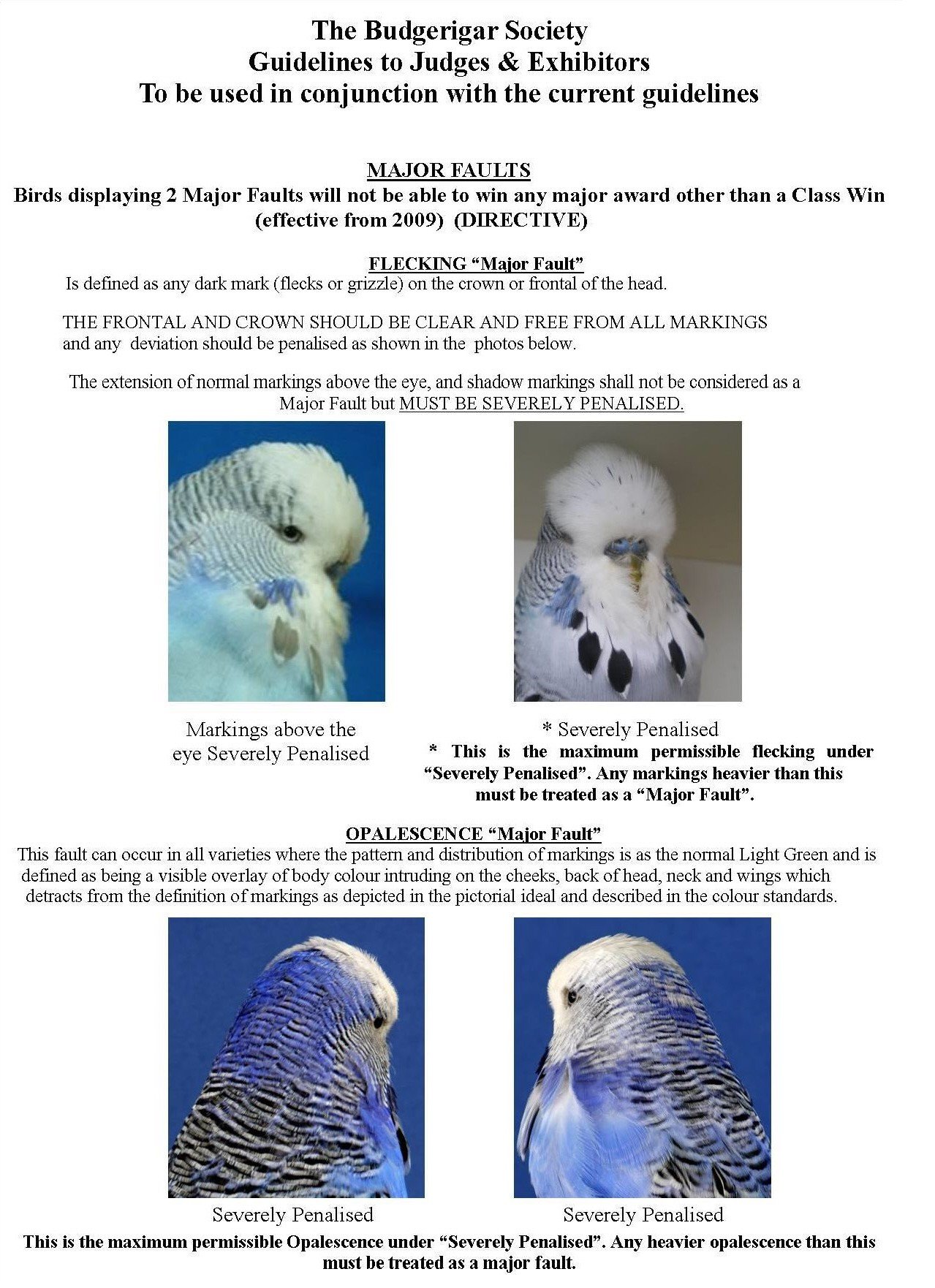 These are the Guidelines for Judges & Exhibitors as agreed by the General Council at its November 2011 meeting and for immediate use.

Scale of Points – The Scale of Points shall remain as published in the 2009 Colour Standards book.
Guidelines for Judges & Exhibitors – Major Fault shall be identified and penalised in an attempt to eradicate the ongoing faults seen in winning exhibits.
MAJOR FAULTS Birds displaying 2 Major Faults will not be able to win any major award other than a Class Win. (effective from 2009 directive)

Faults and/or defects, which shall be penalised by judges: where the word penalised is used it denotes that a penalty shall be applied by a judge according to his opinion of the degree of severity of the faults and/or  defects, which are before him for consideration. Where a DIRECTIVE  is given it must be strictly adhered to:

THE STANDARDS OF PERFECTION, SCALE OF POINTS, COLOUR STANDARDS AND PICTORIAL IDEALS AND THESE GUIDELINES shall all be read in conjunction with each other, they all play a part in serving as a guide  to both judge and exhibitor.

COMMON TO ALL VARIETIES

1. CONDITION IS ESSENTIAL. If a bird is not in condition  it shall be penalised. Perfect show condition is defined as a bird that  is complete in feather. Whether it be Yellow or Buff the feather shall show the bloom of good health and good preparation. The presence of pin feathers or blood quills shall be assessed with due regard to the effect on the overall balance of the exhibit and shall be penalised accordingly.

2. LONG-FLIGHTED A bird carrying long-flight characteristics (excessive length of flights and or tail) shall be disqualified. (DIRECTIVE)

3. SCALYFACE Birds showing any sign of scalyface must be removed from the show bench by the show management on the instruction of the Judge. Where possible affected birds shall be isolated from the show hall, as shall any exhibit which shows signs of sickness or distress. (DIRECTIVE)

4. MAJOR FAULTS Birds displaying 2 Major Faults will not be able to win any major award other than a Class Win (effective from 2009) (DIRECTIVE)

i. FLECKING “Major Fault” Is defined as any dark mark (flecks or grizzle) on the crown or frontal of the head.

a. THE FRONTAL AND CROWN SHOULD BE CLEAR AND FREE FROM ALL MARKINGS and any deviation should be penalised as per photos.

b. The extension of normal markings above the eye and shadow markings shall not be considered as a Major Fault but MUST BE SEVERELY PENALISED.

ii. OPALESCENCE “Major Fault” This fault can occur in all varieties where the pattern and distribution of markings is as the normal light green and is defined as being a visible overlay of body colour intruding on the cheeks, back of head, neck and wings which detracts from the definition of markings as depicted in the pictorial ideal and described in the colour standards.

a. “One Major Fault” Birds with two flights missing in a wing.

5. COLOUR STANDARDS Any major deviation from the variety content and colour standard shall be penalised.

8. SPOTS. The size of the spots shall be in proportion to the rest of the make-up of the bird as is depicted in the pictorial ideal.

FAULTS AND OR DEFECTS CONFINED TO SPECIFIC VARIETIES, Additional to those listed in guidelines 1 to 8 as above where applicable.

a. The edges of all wing feathers shall be well defined and show the same colour as the body.

b. Absence of body colour on the wings and wing markings as seen on the normal varieties SHALL BE PENALISED.

d. Absence of or variegation of solid colour in primary tail feathers SHALL BE PENALISED.

11. LUTINO AND ALBINO. The following deviations from the standard SHALL BE SEVERELY PENALISED:

a. Pale violet colour in cheek patches or cinnamon brown spots or markings on back, wings or tail.

12. CLEARWINGS (Normal Yellow-wings and Whitewings). The following deviations from the colour standard SHALL BE PENALISED

a. Dilution of the body colour

c. Any markings on the wings, the darker the marking, the greater the penalty

N.B. Opaline, Cinnamon & Opaline Cinnamon Yellow-wings and Whitewings and Yellowface/Goldenface Whitewing Blue Series excluding the Rainbow must be shown in the Any Other Colour classes.

13. CRESTED. An incomplete or damaged circular, half circular or tufted crest SHALL BE PENALISED and the other faults listed in these guidelines for whichever variety is carrying the crest shall also be considered and penalised accordingly.

14. SPANGLE. The following deviations from the standard SHALL BE PENALISED:-

a. Completely black feathers on the wings:

b. Spots not complying with the standard SHALL BE SEVERELY PENALISED.

c. The intrusion of body colour that can appear on the back of the head and neck of the Normal Spangle is specific to the variety, and although not desirable, should be penalised and not regarded as a major fault.

DOUBLE FACTOR SPANGLE Any black or grizzled feather visible anywhere on the bird or green, blue or grey suffusion SHALL BE PENALISED.

15. DOMINANT PIED. The following deviations from the standard SHALL BE PENALISED:-

b. All clear yellow or white wings:

c. Spillage of mask colour around the neck and back of head and the absence of one or more spots.

16. CLEARFLIGHT. The absence of the head patch, broken body colour and/or the presence of dark primary wing or tail feathers SHALL BE PENALISED.

a. Dark markings on wings if less than 10% or more than 20% of total area SHALL BE PENALISED.

b. THE FRONTAL AND CROWN SHALL BE CLEAR AND FREE FROM ALL MARKINGS.

18. ODD EYED PIEDS. Shall be exhibited in the Dominant Pied Class and penalised accordingly.

b. The depth of body colour in Dark-Eyed Clear Yellow will vary in accordance with the body colour it is masking.

20. YELLOWFACE Mutant 1. Spillage of yellow colour from the mask into the body colour SHALL BE PENALISED: the exception being as described in NOTE 2 of Yellowface and Goldenface mutation Standards.

21. YELLOWFACE Mutant 2 and GOLDEN-FACE MUTATIONS. In the double factor form both may display some light spillage of yellow colour into the body colour adjacent to the bottom edge of the mask which is permissible, reference shall always be made to the notes, which accompany the written standards for these Yellowface mutations.

22. LACEWINGS. Incomplete patterns of normal or opaline cinnamon brown markings including primary tail feathers or any suffusion of green or blue/grey colour into the body colour SHALL BE PENALISED.

23. NORMAL AND OPALINE FALLOWS. A complete absence of body colour SHALL BE PENALISED.

24. TEXAS CLEARBODY. The following deviations from the standard SHALL BE PENALISED. Any dark colouring in the primary wing flights, any dilution of colour or smudging of the definition in the wing markings on cheeks, back of head, neck and/or primary tail feathers.

25. EASLEY CLEARBODY. The following deviations from the standard SHALL BE PENALISED: Any light colouring in the primary wing flights, any dilution of colour or smudging of the definition in the wing markings on cheeks, back of head, neck and/or primary tail feathers.

26. HALFSIDER. A Halfsider must display visible signs of two distinct colours and/or two varieties, displaying a split of 50% from the crown of the head to the tip of the tail with the ideal colouring or variety being 50% of each. Anything less than 50% SHALL BE PENALISED accordingly.

28. WRONG CLASSING OF EXHIBITS. When this is necessary judges shall indicate on the cage label the reason; where doubt exists wrong classing shall only be carried out after consultation with fellow judges. The only marks that judges shall make on cage labels are:

29. JUDGING. In an effort to ensure that all birds exhibited are seen by the judge, a Judge must indicate on the label that the exhibit has been judged (i.e. a dash or a cross) and must be placed on all cage labels (in class position area) from the eighth exhibit onwards in each class.

30. MAJOR AWARDS. When judging Major awards the procedure shall be based on at least 50% of Judges being in favour of the selected winning bird, not a simple majority. In the event of a tie situation it is suggested that a system arranged by the show management is implemented that would result in the vote of one judge being discounted.

31. FEE. The recommended judging fee for an open show is currently £10.00 plus reasonable travelling expenses and accommodation where applicable.